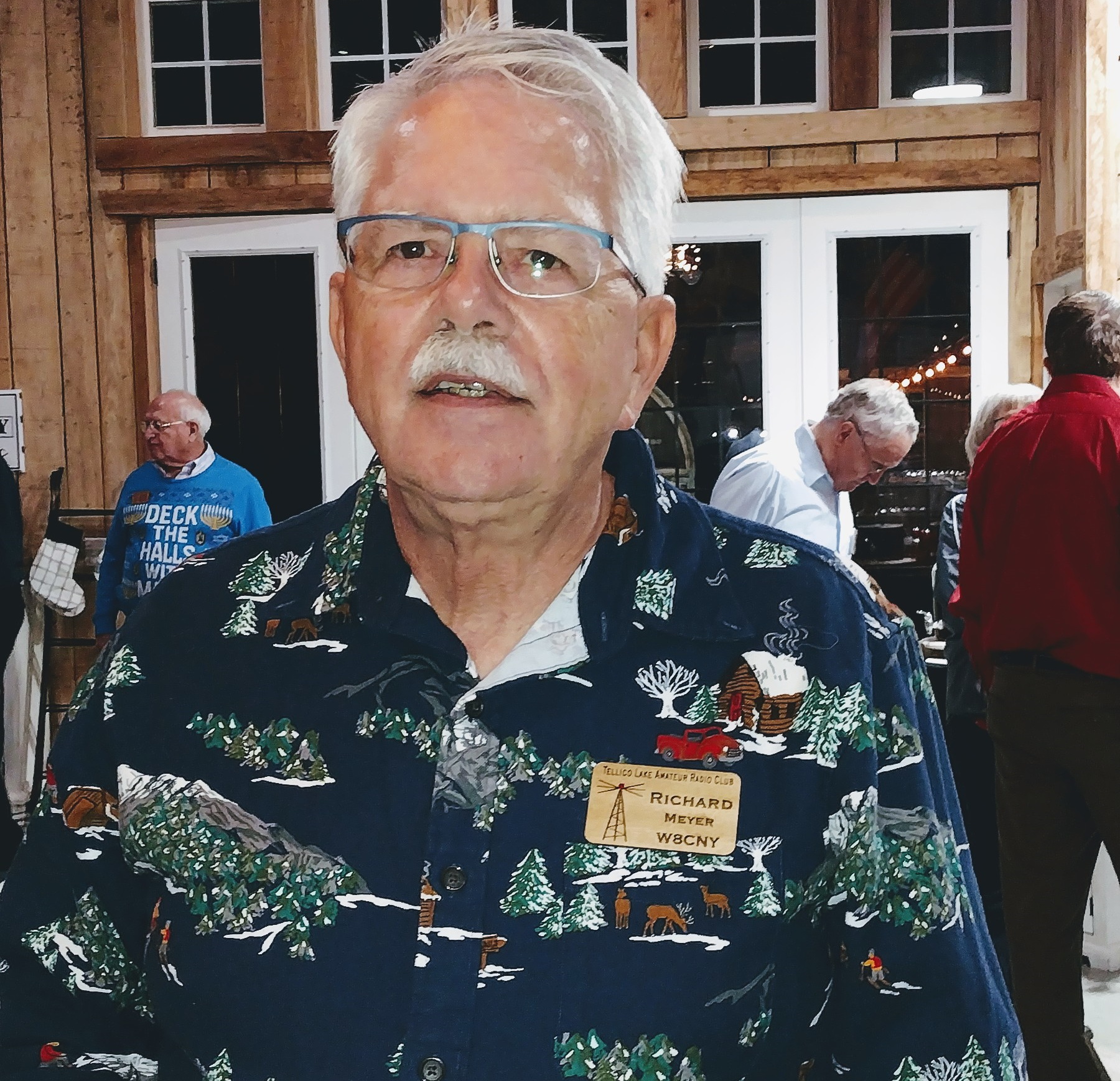 I am Richard Meyer, your new President of TLARC for 2022, and I would like to take this opportunity to introduce myself to you.  After 40 some years in the Dallas, Texas, area I retired to Tellico Village in December of 2020. I am a member of the Tellico Village Volunteer Fire Department; trained as a Fire Ground Technician and as a Medical First Responder. I immediately joined TLARC and was impressed by the people I have met.

I am not the type of person that makes rapid changes to an organization.  TLARC is your organization and can only be as great as its individual parts.  I will need your input, suggestions, and expertise for the coming year. Most of my Ham Radio exposure has been with the equipment side, not so much the operating part of the hobby.  I will need your help as I try to get more involved in on-the-air activities and the various contests.

Okay, a little bit about me.  I have been involved in Ham Radio since I was a teenager almost 60 years ago.  My mentor (Elmer) was a retired TV Repairman and a Ham Radio operator, W8CNY (SK).  As a tribute to him I changed my call sign to W8CNY last year when it became available, I have my Extra Class license. My mentor had a basement full of electronic parts, an experimenter’s delight. While in High School during the mid-1960’s I built several Heathkit projects. My first major DIY project was a fast scan black & white TV camera that contained 8 vacuum tubes. The TV camera was soon on the air operating at 420 MHz.  I entered the TV camera into my High School Science Fair, received awards at several Regional Science Fairs and the US Air Force.  After graduation I joined the US Air Force and was trained in secure Crypto Communications as an Electronic Technician, this was during the Vietnam War.  I was stationed at a remote Radar site on a mountain top in Germany; this was the Air Traffic Control Center for Berlin.  During the day, along with my other duties, I ran the MARS Radio Station and made Ham contacts at night.  Back then we used a state-of-the-art Collins KWM-2A transceiver with a 1kW Linear Amplifier feeding a 3 element beam antenna.  The entire world was at my doorstep.
After the Military I received my Electrical Engineering degree from The Ohio State University. Over my career I have; developed Radar Missile Guidance Systems for the US Navy, developed Bar Code Readers for the US Post Office, designed 50/60/400 Hz High Power Inverter Systems, been a Research Professor at the University of Arkansas, a Chief Engineer at two firms, and an Electrical Safety Engineer for Underwriters Laboratory (UL).  While working at Texas Instruments I was on the team that developed the technology behind the new digital televisions.  I have 10 US Patents and over 40 International Patents, all in Television and Optical Systems.  My claim to fame is my Patent 5,526,051 entitled “Digital Television System”, as it was the beginning of High Definition Television (HDTV) as we know it.  The next time you see a DLP Conference Room video projector or go to the Movie Theater and watch their new Digital Projectors…those are mine also.

So, what is in my Ham Shack?  It is currently under construction as I am adding a rather large Man-Cave above the garage and attic.  My house backs up to the 16th Fairway of the Toqua Golf Course, the lot is too small for a typical antenna farm, not even enough room for a decent dipole antenna.  My HF rig is a Kenwood TS-480SAT, currently no transmitting antenna for it at this time.  My 2m/70cm UHF/VHF rig is a Yaesu FT-7900R/E with a mag mounted Comet CA-2X4SR antenna, good enough for the time being.  At this time my vehicle has no Ham radio mounted in it, so I use a Yaesu FT2D HT for mobile operations.

What are my other hobbies?  I enjoy the restoration of vintage Vacuum Tube radio equipment.  I have a Collins 51S-1 HF Receiver (0.2-30 MHz range) and a Military R-390A/URR Receiver (0.5-32 MHz range).  I enjoy rebuilding, calibrating, and selling old Vacuum Tube Testers; the Military TV-7 is the most popular model.  My electrical workbench consists of; a Tektronix DPO3034 4-channel Oscilloscope (300 MHz BW, 2.5 GS/s), an IFR A-7550 Spectrum Analyzer (10 kHz-1 GHz range), an IFR-1500 AM/FM Transmitter/Receiver Calibrator (100 kHz-1 GHz range), an EIP-545A Frequency Counter (10 Hz-18 GHz range), plus a multitude of other test equipment.  In short, I have a complete RF Test Lab.  I enjoy metal working with a mechanical workbench consisting of; a Sherline CNC Metal Lathe, a Sherline CNC Metal Milling Machine, plus other power and hand tools.  Over the years I have acquired a unique 250+ piece collection of vintage Simpson analog test equipment, including the Simpson 260 Volt/Ohmmeter series

So, what can I offer you?  I maintain a complete set of resistors, capacitors, inductors, vacuum tubes, and other electronic components. If you need some parts for your own Ham Radio DIY project, just ask me.  I am just returning the favor of what my mentor (Elmer) did for me many years ago…tell me about the project and these electronic parts are yours for the asking.

No comments to show.

Tennessee Parks on the Air Event